Cameos and intaglios are carved gemstones, collectively they are known as ‘glyptics’, and the difference between the two is dictated by whether the design protrudes from the stone (cameo), or carved into the stone (intaglio). Both techniques have been prized since ancient times, with histories going back millennia. 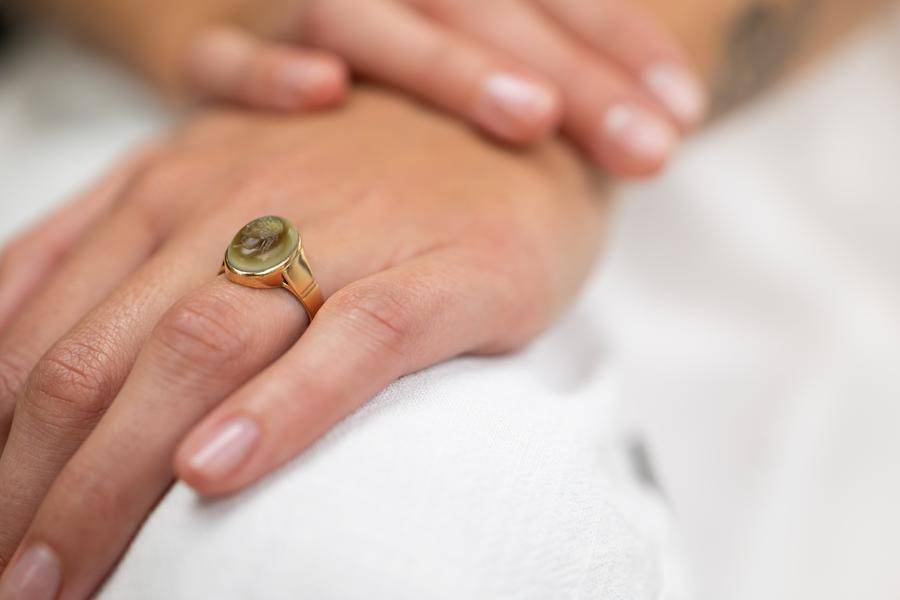 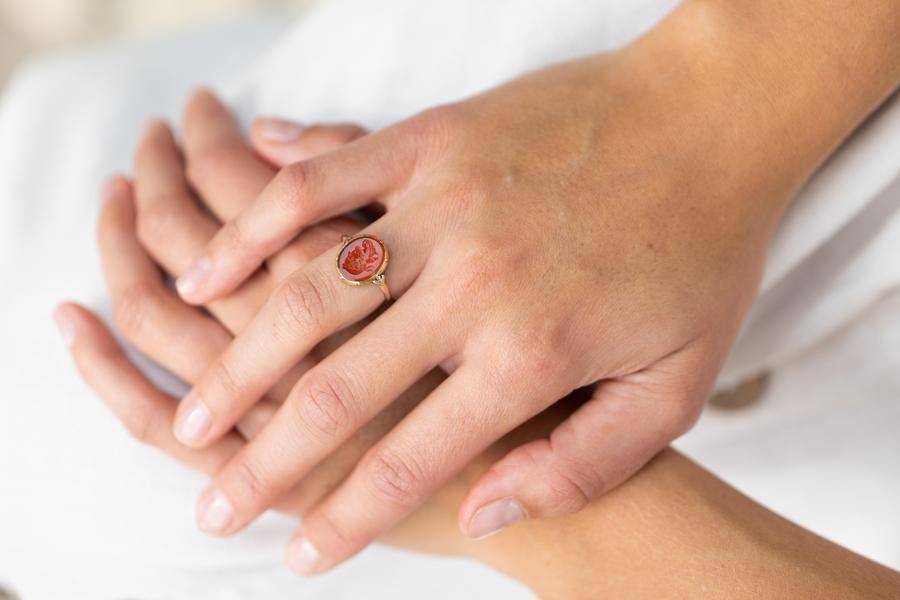 While stone carving was practised in a variety of forms by many civilisations across the ancient world, the specific art of cameo and intaglio carving as we know it today was most strongly associated with ancient Greece and Rome. In these civilisations, glyptics were an important part of everyday wear and were immensely popular for their talismanic and protective qualities, carved with an array of deities, mythological figures, narrative scenes and animals. This group of unusually large layered agate cameos includes the Blacas Cameo in the British Museum, which depicts the idealised, youthful Augustus in profile with a jewelled headband (a medieval addition covering the original laurel wreath), carrying a shield-like item most commonly associated with the gods Jupiter and Minerva: an aegis, adorned with the head of a Gorgon. Depicting the emperor in this manner closely associated him with the gods, and in fact Augustus was actually deified after his death.

Cameo portraits of emperors and their families, like most royal portraiture, would often be copied, and the carver would use other carvings, statues, coins and whatever source material they could find in recreating the likeness of their famous subjects. As cameos and intaglios went in and out of fashion over the course of history, these ancient portraits were still very popular points of reference, and it is not uncommon to find later versions of these prominent Roman figures, as demonstrated by an 18th century green chalcedony intaglio of Augustus’ son-in-law, the Roman general Agrippa (64/62-12 BCE) in the Antique Ring Boutique's collection. An 18th century intaglio of Marcus Vipsanius Agrippa, (64/62-12 BC), in the Antique Ring Boutique’s collection. Amethyst intaglio of Caracalla, circa 212CE, later repurposed as a portrait of St Peter.

With the fall of the Roman empire, the popularity and production of carved gemstones declined. However, several ancient examples survived, albeit often in new settings designed to fit the entirely different religious landscape of the time, such as another cameo of Augustus in the 10th century cross of Lothair in the treasury of Cologne cathedral. Others were repurposed altogether and their previous history erased, such as an amethyst intaglio in the treasury of Sainte Chapelle in Paris, which started its life as a portrait of the emperor Caracalla (circa 212 CE), but was later converted into a portrait of St Peter with the addition of an engraved cross and a Greek inscription.

The first major revival of gem carving after the fall of Rome came in the Renaissance, as part of a broader renewal of interest in the classical world. Prominent figures such as Elizabeth I of England (1533-1603) and Cosimo I de’ Medici, Duke of Florence and Grand Duke of Tuscany (1519-1574) once again turned to cameos to depict themselves as enlightened rulers in the classical tradition, and also formed their own magnificent collections of ancient carved jewels. A rediscovered Poniatowski gem in the collection of the Antique Ring Boutique, remounted by Cartier in the 1940s.

As study of the classical world once again became a vital part of any sophisticated young man’s educational curriculum, it became fashionable by the 18th century to embark upon ‘Grand Tours’ of Italy and Greece, and major gem carving workshops in Rome and Naples catered to increasing demand for these ancient gems. Of course, not all dealers were completely honest, and the practice of passing off a recent carving as an ancient survival was as commonplace as ever. Nevertheless, they inspired a new generation of ardent collectors and connoisseurs, who prided themselves on scholarship of ancient glyptics while also commissioning new carvings of their own. England was a particular centre of collecting, and the collection of the 4th Duke of Marlborough (much of which was purchased from the Gonzaga Dukes of Mantua and then acquired by the Earl of Arundel), and the Beverley Collection (started by the Duchess of Northumberland and still in private hands) are among the most prominent.

Alongside this fascination with ancient examples was considerable demand for contemporary carvings, particularly spurred on by the court of Napoleon I Bonaparte (1769-1821), and gem carvers such as Filippo Rega (1761-1833), Nathaniel Marchant (1739-1816) and Benedetto Pistrucci (1783-1855) commanded particularly high prices for their works.

Among the most fascinating collections is that of Prince Stanislas Poniatowski (1754-1833). Prince Stanislas was nephew of the last King of Poland, Stanislas II Augustus, and a key figure of the 18th century Polish/Lithuanian government. He was also an avid antiquarian and patron of the arts, who commissioned around 2500 carved gems from a group of gem engravers in Rome, depicting a number of Greco-Roman historical and mythological scenes, primarily using literature as their source material. Poniatowski encouraged the belief that these were ancient gems rather than contemporary works, and published details of his collection in his own Catalogue des Pierres Gravees Antiques de S.A. le Prince Stanislas Poniatowski in 1830. Upon the prince’s death, his collection was sold at auction through Christie’s in London in 1839, and the collection was dispersed.